„The attitude towards the gift of life is the basic test of the authentic attitude of a man towards God and towards another man, that is the test of authentic religiousness and morality ”
John Paul II, II Pilgrimage to the Fatherland, Jasna Góra, 19th of June 1983

How to do it?
In private or in public – in a church, in a community or during a pilgrimage – you should say the vow of Spiritual Adoption. From that starting day for the next 9 months, i.e. 40 weeks, every day you pray one mystery of the rosary and a special prayer in the intention of the child and his or her parents.
Together with the prayer you can make some additional resolution. It can be for example: going often to Confession and Holy Communion, Adoration of the Holiest Sacrament, reading the Bible, fasting on bread and water, abstaining from watching TV, from drinkng alcohol or smoking, specific help for big families, sick people, disabled, mothers bringing up their children alone etc. It should be a feasible resolution, you have to be able to fulfil the commitment.

When to start?
Children are being conceived everyday that is why every day is good for starting the prayer privately, taking in your spiritual care a new life. It is adviced to undertake the commitments of the Spiritual Adoption in a ceremonial manner, during important events and church holidays, which as many people as possible take part in (Advent or Lent retreat, pilgrimages, Our Lady Feasts).

Who can do it?
Everyone. Lay people, consecrated persons, men, women, people of alla ges. Only children undertake the adoption under the supervision of parents.

How many times can you do it?
It can be done repeatedly, under the condition of fulfillment of the previous commitments.
If the prayer is interrupted for a few days due to forgetfulness, you should now stop the Spiritual Adoption but instead extend it by the numer of missed days. If the interruption is longer (a month or two), you should make a promise again and try to keep it.

History
The beginnings of the Spiritual Adoption of the Unborn Child are associated with the apparitions of the Blessed Virgin Mary in Fatima. The prayer of the Spiritual Adoption was the answer to Mary’s call for praying of the Rosary, penance and compensation for the sins that are most painful for her Immaculate Heart. It was brought to Poland in 1987 by the academic youth of the „Guards of the Generations” community of the Pauline church of the Holy Spirit in Warsaw, acting in protection of life.
In this church, on the 2nd of February 1987, the first vows of the Spiritual Adoption were made. From there, the prayer spreaded over the whole country and abroad.

Catholic Church permission / Imprimatur
The prayer was published with the permission of the Metropolitan Curia of Warsaw (31st of March 19987 No. 1687/K/87). The ceremonial of the vows – Bishop Curia of Gdansk 27.09.1994, Fr. Lauer, PhD – General Vicar. The Spiritual Adoption received blessing of the Pope John Paul II (the Letter of the Secretariat of State from 25.04.1994, sent to Fr. Szczepan Kośnik, Prior of Jasna Góra Monastery).

Testimony
I have been dealing with life protection since 1984. My great adventure started many years ago in Fatima. One monk gave me two figurines: one of Our Lady of Fatima and the other of Virgin Mary Breast-feeding Baby Jesus. Soon after this happened, I started to attend prayer meetings of a Catholic Charismatic Renewal group. During intercessory prayer for the gifts of the Holy Spirit, Jesus touched my heart very firmly. The sign, that particularly „spoke” to me was a photograph, that somebody gave to me, of an unborn child, hidden in a human hand with caption „I am safe”. The desire to save a life has never left me since that moment. I believed that God can create such circumstances in which my dreams will come true. And this is what happened. Shortly afterwards, I was asked to meet with the youth from a high school in Warsaw. From this meeting, the next ones followed, in schools, communities, pilgrimages. For the first time, I came across the Spiritual Adoption through the academic of the „Guards of the Generations” community of the Pauline church of the Holy Spirit in Warsaw. In 1989 I went on a pilgrimage to the Holy Land. In Bethlehem, in the place of Jesus’ birth, I put a tiny figurine of a 10 weeks old baby and I prayed so that this prayer project could reach all places in the entire world. Exactly nine months later I was invited with the prayer of Spiritual Adoption to the first parish. At that moment, my ceaseless apostolic journey started. Up to now, I have had thousands of meeting, sharing my personal testimony and promoting Spiritual Adoption during pilgrimages, sacerdotal and youth retreats, in schools, theological colleges, prisons, catholic media, parishes in Poland and abroad (for example Ukraine, Belarus, Lithuania, Germany, Great Britain, France, Croatia, Hungary, Israel). I witnessed the healing power of God, coming from this humble prayer, as well as His mercy and numerous miracles, which I collected in a comprehensive documentation. Thousands of young people, undertaking the prayer of Spiritual Adoption during walking pilgrimages to Jasna Góra, entrusted their lives to Blessed Virgin Mary and decided to take on the commitment of chastity before marriege.
The power of this prayer is truly great.
The essence of the Spiritual Adoption is the protection of the conceived life – the gift of God Himself. It i salso a thanksgiving for your own life and at the same time, the fulfillment of the gift of parenthood for those, who cannot have their own children. It also gives a chance of expiation – a compensation for women who killed their unborn child. In the heart of these women, there is a desire for purgation and penance, because they are made for loving and for giving life. The sin of abortion causes in their minds an enormous desolation, which in medicine is called the post-abortion syndrome. The Spiritual Adoption is a very effective cure for the hurt hearts of mothers and fathers, because it brings back peace to families. In brings also grand fruits among youth, who with the prayer, can prepare in a more mature way to the sacrament of marriage. Nine apostolic initiatives in protection of life and family have grown out of Spiritual Adoption. They are promoted by the animators of the Central Station of Spiritual Adoption, with the headquaters in Częstochowa, Jasna Góra. The moderator of the Spiritual Adoption of the Unborn Child is Stanisław Jarosz – a Pauline from Jasna Góra.

Wiesława Kowalska,  Animator of the Central Station of Spiritual Adoption in Jasna Góra. 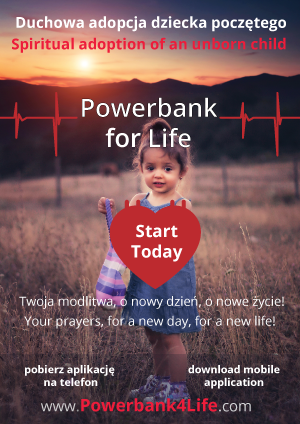 The app is available for download on Google Play and the App Store.